Weâ€™ve hand crafted each beautiful element just for this theme.

We are proud to announce that Panucci Custom Guitars is reaching for new frontiers. Last year in 2019, at the Mannheim guitar summit, many visitors told me that my guitars were some of the best at the show, but they didn’t know the brand name. This made me realize that we can no longer be […] 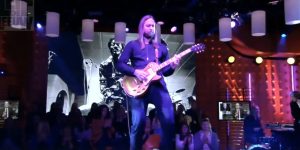 Panuccis are played by musicians.  So it’s not a surprise to see them regularly on stage and on television. The Dutch TV show De Wereld Draait Door (DWDD) features a lot of musicians, including De Staat, Chef’Special, Lucas Hamming, MisterandMississipi and many others. However, this time, when Leif de Leeuw hit the stage, his presence […] 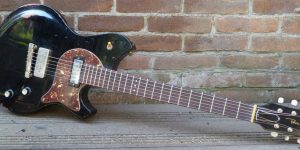 Building of The Wizard

All the year I had been so busy with all kinds of orders, but finally I managed to take some time for starting my own models. Actually, these are re-issues, or re-inspired recreations of the models that I made since the late ’90. I have always been very reluctant to build the traditional models. Six […] 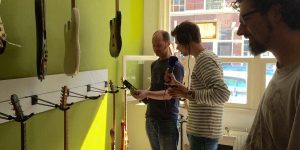 Freija was the main guest for night show Nachtkijkers (night vision goggles) for Radio 1. The whole show from 2AM till 6AM! Her main topic is exploring the future and her work as chair of the Dutch Future Society. Reporter Ruben Kooren paid a visit to The Guitar Lounge and made a report on my […]

I am never fond of raising prices. Didn’t do so when sales taxes went up in the Netherlands. Didn’t do it when the Euro went down on the Dollar. 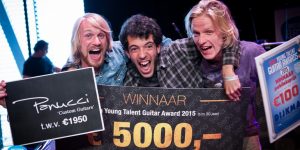 We congratulate the winners of this year’s SYTGA, Antonio Molina Moya and Tom Renet with their first price of a custom Panucci guitar. We are looking forward to discuss their wishes, favorite specs to find what they were looking for, just as we did last year for Leif de Leeuw and Ryan Vroon. Having seen […] 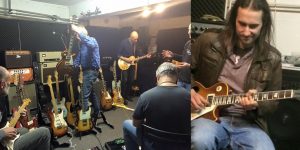 Panucci meet up in a Cologne rehearsal room

Sheer coincidentally, there are several Panucci players in the Cologne region. And even more so interested in Panucci. Then one Cologne guitar player came to my shop and invited me to his practice basement in Cologne. And so a group of eight guitar players were there and the space full of Panuccis. Some brought their […] 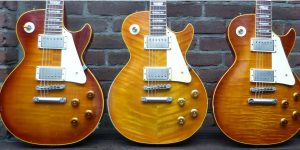 In this early stage of the ’59 series, I need some thorough testing to get a good understanding of the sound and how they are appreciated. Especially because vintage guitars and the real ’59s (build between ’58 and ’60) sound a bit differently than the ones that are build today. My quest is to design […] 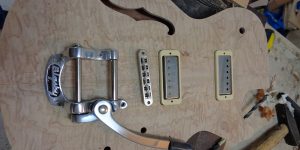 My idea for the ’59 Inspired series is to design a  whole range of vintage inspired guitars. So I started with this thinline flat-top guitar. The top has a nice flame. Decided to make just one soundhole, with the same shape as I did earlier for an archtop guitar. No soundhole on the other side […]